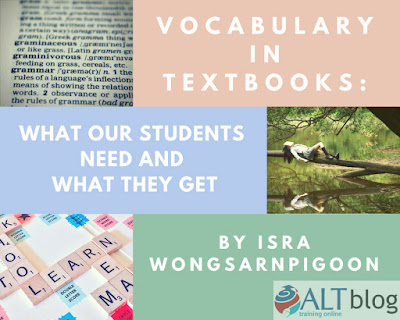 Bio: Isra Wongsarnpigoon is a learning advisor in the Self-Access Learning Center at Kanda University of International Studies. He originally came to Japan on the JET Programme and taught as a senior high school ALT in southern Chiba prefecture.

After his JET stint, he continued working as an ALT for the board of education in another city in Chiba, teaching in junior high and elementary schools. While at this job, he earned his M.S.Ed. from Temple University, Japan Campus.
Aside from L2 (second language) vocabulary learning, his recent research interests include learner autonomy, learner motivation, reflective practice, and positive psychology.
Note: In this entry, I loosely describe a study that I presented at the 2017 JALT national conference. For a more detailed report, please read my paper (Wongsarnpigoon, 2018) from the post-conference publication.

Are any of these experiences familiar to you?

These all happened to me more than once and helped inspire my study. I was also motivated by another experience from a few years prior: When the 2012 editions of the English textbooks were published, I remembered my Japanese teacher of English (JTE) colleagues lamenting how much more vocabulary they needed to teach. The textbooks conformed with new MEXT guidelines, which set a vocabulary learning target of 1,200 words for junior high school—an increase of 300 from the previous guidelines (MEXT, 2008).

These various concerns made me curious about the textbooks’ contents, especially considering that they are a major source of vocabulary input for junior or senior high school students, many of whom intensely prepare for entrance examinations. I checked MEXT’s guidelines and discovered that while there was a set target number of words, the actual vocabulary selection was entirely left to individual publishers! It made me wonder: How useful were the words in the textbooks? Did the vocabulary suit students’ needs?

Before continuing, I’ll briefly mention some principles of L2 vocabulary learning that serve as the underlying foundation of this article, although I’m sure David Coulson’s vocabulary module will cover them also. First, a learner’s comprehension of a text greatly depends on the amount of known words in it. Laufer (1989) found that when learners knew 95% of the words in a text, they could achieve adequate reading comprehension. More recently, knowledge of 98% of the words is considered a more appropriate target for unassisted comprehension (Hu & Nation, 2000). This 3% difference can be visualized like this: When students know 95% of the words, one out of every 20 words, or one word every two lines, is unknown; when 98% of the words are known, one out of every 50 words, or one out of every five is unknown. That makes quite a difference.

These thresholds therefore underscore the importance of knowing the most frequent words in English. In a landmark study, Nation (2006) calculated what size vocabulary was necessary in order to comprehend various kinds of texts. The most frequent 2,000 words (generally known as high-frequency vocabulary) tend to make up about 80-90% of authentic texts. As such, beginners should focus on learning high-frequency vocabulary first.

The final major concept is that repetition is crucial in learning vocabulary. Students need to encounter a new word multiple times in order to learn it. Some researchers have written that seeing a word in context 10 times leads to learning (Webb, 2007), while others like Nation (2013) believe that at least 20 encounters are necessary. In any case, it’s clear that the more times students see a word, the better!

I built on these theoretical assumptions to investigate the vocabulary in the New Crown junior high school textbook series (Takahashi, et al., 2012). Since high school exams were often my students’ ultimate targets, I also wanted to look at actual exams, so I could see how well the textbooks’ vocabulary prepared students for them. I thus also analyzed the English sections of the public high school entrance examinations for several prefectures from 2015 and 2016.

For my study, I followed Webb and Nation’s (2008) procedure for analyzing the vocabulary in texts and used the computer software Range (Heatley, Nation, & Coxhead, 2002), which is available on Nation’s website. Range analyzes texts, provides various data about every word in the file(s), and also sorts the words according to preset base lists, usually lists based on levels of frequency in English. With this data, I checked the textbooks’ and exams’ vocabulary levels by determining what size vocabulary would allow students to reach those crucial 95% and 98% thresholds.

For the combined three volumes of New Crown, knowing the most frequent 2,000 English words would cover 95% of the books’ vocabulary, and the first 5,000 words covered 98%. These levels varied for individual volumes, though. In Volume 1 (for seventh graders), the most frequent 3,000 English words allowed 95% coverage, while the 98% threshold was reached at 6,000 words. In Volume 3 (for ninth graders), however, the first 2,000 and 4,000 words were needed for 95% and 98% respectively. This doesn’t necessarily mean that Volume 1’s vocabulary was more difficult; it may just reflect the kind of topics and grammar used in each book.

For the entrance examinations, knowing the most frequent 2,000 words allowed 95% coverage, and the first 3,000 words covered 98%. This result shows that the vocabulary levels of the exams were lower than that of the textbooks, so knowing enough vocabulary for the textbooks would conceivably be enough for the exams.

Next, although 321 of the most frequent 1,000 words were in every volume, only 58.6% of them appeared more than 20 times, as recommended by Nation (2013) for learning. Another 17.8% of them didn’t even reach the minimum 10 times that Webb (2007) recommended. Of the 47 words from the second 1,000-word level appearing in every volume, only 34% occurred over 20 times, and another 34% had fewer than 10 repetitions. In all, only 204 of the most frequent 2,000 words appeared in every volume and had a suitable number of occurrences. Conversely, over 51% of the high-frequency words in the textbooks appeared six times or fewer, so students would see them very few times and be unlikely to learn them from textbook input alone.

High-frequency words represented over 95%, of the overall vocabulary, so New Crown appropriately focused on the most useful words first. In an earlier study (Wongsarnpigoon, 2017), I tested some target learners and found that they were still in the process of learning those most frequent 2,000 words. Thus, the textbooks would make a good learning target. The entrance exams had slightly easier vocabulary than the textbooks and contained fewer total words than MEXT’s target figure, so conceivably, there might be few words on the exams that students had never seen in the textbooks.

Students didn’t have enough opportunities, however, to learn vocabulary through repetition. High-frequency words tended not to appear in multiple volumes and often were not recycled in later ones. Even though it’s possible that the exam takers might have seen all the vocabulary at some point in the textbooks, that doesn’t mean they learned them adequately. The textbooks aren’t enough to carry the students’ learning burden for these words.

What This Means for ALTs

There are several things ALTs can take from these findings. First, you can supplement textbooks by providing some of the repetition and recycling of vocabulary that is lacking. Of course, students don’t read through a textbook chapter once and move on as if reading a novel; they usually go through a chapter multiple times in class. Still, those repetitions are all in the same context, and once students finish that unit, they might never see some of those words again. If you use your own original materials or tasks in class, you can take the opportunity to recycle some older vocabulary. For example:

Next, as an ALT, I tended to use communicative or meaning-focused activities in class. Researchers like Nation say, however, that learners need deliberate, explicit vocabulary learning along with the incidental learning that might happen through communicative activities. If you have a lot of freedom in class or teach with open-minded, flexible JTEs, you could work together to teach students about practical ways for deliberate vocabulary learning, such as the effective use of learning strategies, dictionaries, flashcards, or mobile applications. We can’t assume that JTEs know these things already, either. I once gave a workshop about effective vocabulary learning and spaced repetition to junior high school teachers, and it was clear that many of the principles were new to them. It might be educational for your JTEs as well to collaborate on sharing these ideas with students.

Finally, this kind of analysis can help you find out which words students might need more exposures to. For instance, a simple analysis of your own materials might show that certain valuable words don’t appear enough times, so you could use them more often in your activities to bring them to students’ attention. On the other hand, if you find that certain words appear often enough in the textbooks or are less important to students (for example, mid-frequency items), you might choose to use them less frequently and focus more on other, higher-frequency words.

Research like this not only allows us to look critically at published materials, it also helps us think about how we can support our students better. ALTs rarely have much control over the textbooks they use, so learning about what’s inside them is an important step in knowing how to supplement them. This will be even more crucial when the next MEXT guidelines are fully implemented, as the junior high school vocabulary target will rise again, to between 1,600 and 1,800 words (MEXT, 2017). With textbooks’ vocabulary input being insufficient and the burden on teachers high as it is, ALTs will have many opportunities to expand their roles in helping students’ vocabulary learning as well as develop their own professional practices.

Aside from my references, you might find these helpful: