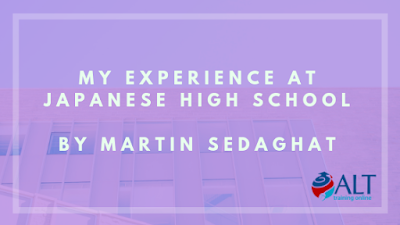 Bio: Martin Sedaghat has worked as an English teacher in Niigata, Japan, for the past 14 years. A native of San Diego, California, he received TEFL certification from the American Language Institute at San Diego State University and worked as both a JET and private ALT for the Niigata City BOE (board of education). Following that he was a homeroom teacher and English instructor at an international high school for 2 years. Since 2018 he has been working at an English language preschool, teaching children from the ages of 0 to 3 and developing an original curriculum based on the theory of multiple intelligences. Beyond teaching, his interests include video games, tabletop games, and illustration.

I had the unique opportunity to work as a homeroom teacher at a private high school in Japan for two years. Though my experience was significantly different from that of a high school ALT, I feel there are some observations and anecdotes that may prove useful to ALTs working in such an environment.

As mentioned in some of the preceding information about Japanese high schools, there are many schools that have specialized programs and curriculums aimed at specific career paths. The school I worked at had 3: athletic, medical, and global (English language intensive).

Teaching there was often challenging but interesting, as any given lesson might focus on completely different textbooks, levels, and motivations than the next.

Athlete classes, for example, tended to be quite low level, and we often used textbooks that heavily featured junior high school-level material (self-introductions, talking about holidays, giving simple directions, etc.). The vast majority of these students were there to train and play their sport. English was very low on their list of priorities. The other English teachers and I tried to make our lessons as fun and interactive as possible, usually utilizing skits based on situations from the textbook (ordering food at restaurants, going sightseeing, talking on the phone, etc.). Our tests were always very simple, using multiple choice and matching words into dialogues, and we often made the skits themselves account for a large portion of the test grade.

One major challenge in the athletics course was that many students were often absent from school, having to travel for tournaments and training camps all over the country. One week all the basketball students might be gone. As soon as they came back then the judo team would leave. This made it very difficult to keep up with any kind of schedule and pacing. Along with very low motivation among the students, this led to very low test scores.

Many students were below the minimum passing grade, but the coaches and school administration strongly suggested that we give them make-up work so that they could earn at least a 2 (in the 5 level Japanese grading system).

The medical course, on the other hand, was designed like a kind of test factory, and students in this program were expected to devote the greater part of their days to studying and rote memorization. Their placement and progression in the university system was based almost solely on test scores, so their English curriculum was heavily weighted towards practice for these exams. In fact, most (if not all) of these classes were taught only by Japanese English teachers, as it was generally agreed that they were better suited to explain the intricacies of English grammar and test strategies, and non-Japanese teachers had little to offer them.

As time passed and the students got closer to graduation, they became full jukensei (students preparing for exams).

Most of the normal curriculum was put aside and they spent their entire time at the school either in test preparation courses or in the library, studying the year’s accumulated notes. At this point, there was basically no more interaction between the non-Japanese teachers and the medical course students.

Finally, there was the global course, with which I had the most involvement. These were students who had entered the school with a very high level of interest and ability in English and were planning to enter university in an English-speaking country. Lessons with the global students were by far the most enjoyable, but also the most work for me, as their curriculum necessitated extensive writing assignments, both research-based and creative, and long-term projects. These projects were often completed in groups and required leadership, organizational, and problem solving skills, in addition to the English goals that had been set.

We also focused a great deal on the TOEFL exam, as it is the current standard for application to western universities (and will soon be used for determining English levels for many Japanese schools as well).

The TOEFL presented an interesting challenge in that several parts of the exam called for a combination of skills (referred to as “integrated”).

For example, students were asked to read a passage about an academic topic, and then listen to a recording of a lecture given on the same topic. Finally, they were tasked with writing about both the reading and listening parts, while also noting how the two contrasted one another. Students studying for the TOEFL could not afford to focus only on the English skills that they were best at. Teaching this class was a new challenge for me, as it was very different from the Japan-centric textbooks and testing systems that I had been used to as an ALT.