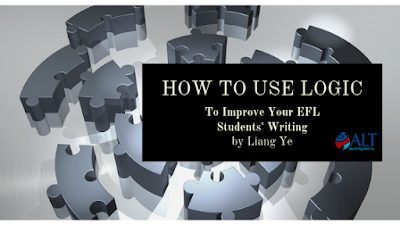 Bio: Liang Ye is an accidental English teacher. Her previous professional experience was in public policy with the Singapore Government.

She holds a Bachelor of Social Science (double major in Sociology and Psychology), a Masters of Arts in Sociology, and also a Level 7 Diploma in TESOL.

She currently speaks four languages and is learning another two.

Now, she works as an English instructor in Kansai Soka High School in Osaka, Japan.

I have lived in Japan for a total of six years so far, and had only started teaching English in classrooms three years ago. Even before starting a formal career in teaching, I found myself correcting English essays from children of acquaintances and entertaining odd requests from time to time. Then, I started noticing something peculiar.

Occasionally, I would receive essays that were written in flawless English, but I had no idea what they were talking about.

How is that even possible? The grammar was perfect! But the sentences had no apparent logical link with each other, and the clauses were put together as if the author was talking in circles or even broken spirals. It reminded me of sample speech patterns of patients with schizophrenia or cognitive dissociation in psychology textbooks. How should I even begin to correct them?

Thus began my quest to help English learners straighten out their writing.

A couple of years ago, I joined a senior high school in Osaka as an ALT for the first time. Among my other classes, I was tasked with teaching 6 classes of about 25 students on how to write English essays, all by myself. I was anxious and excited at the prospect. The students had up to that point only learnt how to make sentences. The earlier encounters with “flawless but undecipherable” essays stood out in my mind.

How do I help students learn how to write clearly? Out of ideas and with no other recourse, I turned to Facebook.

One of my friends, upon reading my bewildered post, suggested that I give explicit instructions in the target logic (reason being that most students in Japan are not exposed to logic in their classes), and pointed me to some resources.

From there, I went on to build a 1-year writing course, through trial-and-error, with explicit instructions in logic built into the class. Inevitably, being a newly-minted ALT, I made mistakes and some activities fell flat on their faces. However, there were also elements that worked out very well. In fact, so well that towards the end of the academic year, I had students who reportedly passed Eiken level 2 as they got nearly full marks in the writing section, despite failing the Reading and Listening section. Back then, I had no idea that this hardly ever happens until I told my spouse (a JTE, or Japanese teacher of English, in another school). He had looked at me, his mouth agape, and said in wonder, “That has never happened before”.

Although I have only anecdotal evidence that incorporating logic into a writing course works, I suppose what I did is still worth sharing.

So for those who are interested, I have outlined four basic steps (with some sample activities thrown in as well) to help students learn how to build an argument in English writing.

Although there are many ways to build an argument, the most basic style of writing, when stripped down to its barest form, requires the writer to follow the “If A, then B. Therefore C.” pattern (also called Chain Reasoning).

The key aim here, therefore, is to use the concept of “cause and effect” as a foundation, and then use scaffolding activities to help students learn how to use chain reasoning to write coherently, while avoiding complicated meta-language or brain-twisting Aristotelian syllogisms.

These four steps can either be expanded into a full semester course with lots of practice and examples, or condensed into one lesson, depending on the level of the students and the aim of the writing course.

By teaching students how to build stronger arguments, we also teach students how to think more critically; and this, I believe, should be the cornerstone of a balanced curriculum.

Step 1: Start with the importance of time sequence in cause and effect.

You can reiterate the time-sensitivity of cause and effect with several other (obvious) examples, depending on the level of your students. You may also consider using games or create worksheets to emphasize this.

Step 2: Introduce and go through the following logical errors related to cause & effect.

* Among the four types of errors, circular reasoning is a very common writing pattern among Japanese students, in part due to a lack of control and vocabulary in English. I found the following example (adapted from a student’s essay, and modified for dramatic and comic effect) to be very helpful in driving home what circular reasoning is:

To help students recognize and avoid circular reasoning, I find it useful to ask students to think in very concrete terms, by using specific situations, rather than thinking with abstract concepts.

Since “If A, then B. Therefore C.” is the most basic pattern in building an argument, using the grammar “If…, (s) will…” is probably the easiest way for students to string ideas together in an argumentative essay.

Break down the paragraph in the following way:

Teachers may consider using a variety of examples, or introduce different grammar that follow the same thought pattern. Another pattern is to move the conclusion up in the paragraph and make it the topic sentence:

This second pattern is useful in writing courses where students are taught that topic sentences come at the top of paragraphs. Students can then practice building longer chains of supporting sentences into their paragraphs and work towards writing a full essay.