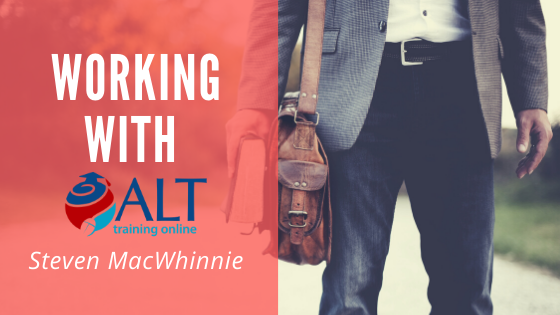 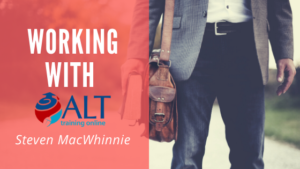 Bio: Steven MacWhinnie is a lecturer at Hirosaki Gakuin University and a doctoral candidate at the University of Leicester.

He has been living and working in Aomori since 2007, first on the JET Programme, then as an Eikaiwa school owner and part-time university lecturer.
His research interests include motivation, engagement, and language awareness. He has published articles on motivation and engagement and is now working on understanding how students use language in the completion of tasks.

I have been helping with proofreading for ALTTO since 2017. Although at that point I was no longer an ALT, I was curious about what ALTTO had to offer.

Back when I first came to Japan to teach as an ALT, there was nothing in the way of solid training.

ALTs were generally left to sink or swim, local BOEs might provide training of some sort, but generally, there wasn’t much in the way of support. I was excited to see that ALLTO was planning on developing modules that would support ALTs new to Japan.

I’d like to elaborate a bit on why I decided to offer to help with proofreading the modules. Back in 2007 when I first arrived in Japan, even the orientation conference in Tokyo didn’t provide much information on what was actually expected of ALTs.

The little information that was given was mostly focused on telling ALTs to not get into trouble. There was no real education on being an educator.

Looking back at my own experience as an ALT, I can’t say I was particularly good when I first arrived. I was very lucky to have worked with some talented JTEs who took the time to teach me how to be a teacher. I was lucky to be able to understand Japanese and be willing to adjust my teaching style as I learned new things about teaching.

ALTTO now has modules providing in-depth detail about different aspects of teaching, what I spent nearly 3 years learning by trial and error is now readable in a few hours.

While my own experiences are rather different (I worked in a rural area), the module on what to expect and how a typical day might go would have been useful information to have when I started.

As I worked for 5 years as an ALT, I saw many ALTs come and go, and I listened to what the JTEs had to say. Even now, I have friends who are JTEs and they often bemoan the lack of education for new ALTs who come to Japan. While I can’t directly speak to the situation now as I am not longer working as an ALT, I remember that many people came to Japan to work as ALTs more as a way to see the world and they weren’t particularly interested in developing their skills as teachers.

I doubt that the situation has changed significantly, but I do know that for the ALTs who come to Japan and want to be more than a tape-recorder and actually teach, ALTTO provides a lot of important resources for those individuals. A friend at the BOE has often commented that the ALTs who come really need more training resources.

Even the ALTs who seem interested in developing themselves as teachers, don’t have access to good training tools.

Even very basic information is lacking. For example, a new ALT went to visit an elementary school. He was asked to teach the alphabet. In the US at least, most would start by showing a picture of an apple, and saying a /æ/ apple. This isn’t wrong, but it only served to confuse the children in the class who were using a different system, learning a as in ant (ɛənt). This simply goes to illustrate the severe lack of training for new ALTs who arrive in Japan.

As I said above, I am no longer an ALT. This might raise the question of why I still decided to volunteer to be a proofreader for the ALTTO project. I work now as a university educator, partly in the training of English teachers. I also worry about the skill level of incoming freshmen students. I am a long-term resident of Japan and I care very deeply about developing not only the English skills but the global sensibility of Japanese students.

Part of that process is by providing students with competent educators who are knowledgeable and able to impart that knowledge.

If ALTs are effective teachers, I suspect that students will become not only better at the English language but see the value in English as a global means of communication.

For these, among other, reasons I am happy to volunteer my time to try and help this excellent project succeed. The only way forward is through more education, both for ALTs and for their students. 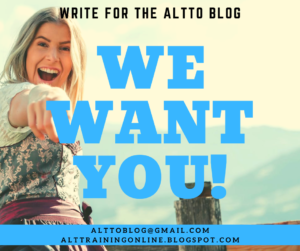