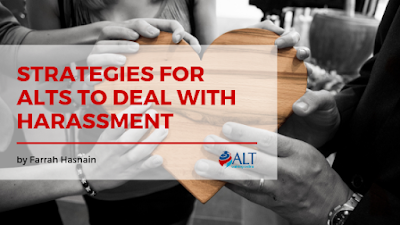 Bio: Farrah Hasnain is currently in her fifth year of the Japan Exchange and Teaching (JET) Programme and is from Washington, DC. She is an Assistant Language Teacher at a senior high school in Hamamatsu, Shizuoka. Her research interests include the ethnography of immigrant and minority communities in Japan and the US as well as English team-teaching methodology in Japanese high schools.

In part 2, we discuss strategies for what to do if an ALT (Assistant Language Teacher) experiences any form of harassment based on feedback from the surveys. We also share what survey/interview participants have said about what their workplaces need to do in order to address these issues in the best way possible.


If you haven’t already, be sure to check out part 1.

Case Studies
Here are some examples/case studies for harassment. You can submit your answers. After this section, you can refer to our advice for reporting/addressing harassment issues. The following cases are based on real situations that many ALTs have experienced in Japan.

Case #1: Creepy-sensei
You are an ALT who has received inappropriate sexual comments from a teacher from another department at work. You have spoken to your supervising JTEs (Japanese Teachers of English) at work, but they said it was a non-issue. It has been ongoing for about 4 months and you are hesitant to re-contract or continue working if the problem persists. You are also eager to report your situation.

Case #2: Stalker-sensei
One of your coworkers is stalking you. At first, he gives you small presents and invites you to events outside of work. But over time, he has sent you intimate messages over LINE and you find him within your vicinity most of the time. Some of your coworkers joke that he is your “fan”, and you want to inform your ALT supervisor/PA (Prefectural Advisor)/CA (City Advisor).

Case #3: Power-Trip
You are a new ALT at an elite high school. The head of the English department has worked at the school for decades. During team-teaching, this teacher would criticize your teaching methods in front of the students. The teacher would also tell you to grade over 400 worksheets from a different class and work overtime for club activities without compensation. According to your contract, you are supposed to receive daikyuu (vacation hours/days) for working overtime. Your predecessor broke their contract and left Japan early, so you do not have their contact information.

How would you confront this issue? Would you discuss this with your coworkers?

What to Do/Stakeholders
Phone Numbers: In Japan, dial 119 for fire trucks/ambulance, and 110 for the police. You should also have your supervisor and BOE’s (Board of Education) contact information filed just in case.

Here is a general guideline for reporting harassment:

1. Document the time/date/location/sequence of events. The more evidence, the better. If possible, take videos and recordings when the events take place. Take screenshots of messages and take note of emails/written exchanges.

1.5. (If the assailant or person involved is a student) Inform the homeroom teacher, club supervisor, and/or head teacher about the student’s behavior. They will usually reprimand the student accordingly, even if the JTE does not discipline the student.

5. If they refuse to get involved, you may contact General Union Japan.

Sexual Harassment/Assault (outside of work)
“Chikan” (groping) is a common problem in Japan. If you get chikaned and want to file a report, call the police ASAP.

Even if you may not know enough Japanese, they can collect evidence and file it immediately. Record the time/date, the sequence of events, and the appearance of the assailant as precise as you can. Some of the officers know some English, or you can use Google Translate for some terms. You can also contact your PA or CA, for advice.

Sexual Harassment/Assault (at work/work functions)
Some coworkers in Japanese workplaces can be entitled. You might hear of all sorts of things, from coworkers saying inappropriate things to stalking.

You can also post anonymously on some expat/JET Facebook groups to seek help (you don’t have to be a JET to join some of them). This also goes for reporting cases outside of work sometimes. Some schools also have a harassment committee among the faculty.

Feedback
Here are the strategies/ideas that ALTs have expressed in the surveys and interviews. The majority of the respondents confirmed that a set system needs to be in place for ALTs, and that ALTs should receive more thorough and explicit training related to workplace harassment.

Both the ALT’s side and the Japanese staff’s/employer’s side need awareness and accountability with these issues. It can’t only be on the ALT. There is sensitivity training or guidelines for Japanese staff members at a lot of schools but they’re not enforced. The ALTs are afraid of reporting because they’re worried about losing their contract or making the problem worse at their school. For example, JET contracts have byoukyuu (sick leave) but it’s not required in lots of Japanese companies. Even though JET contracts clearly have sick leave, schools tend to prevent us from taking it. If you contact CLAIR, you’ll be told to go to your BOE. If you go to your BOE, you are told to compromise with your school…it’s a cycle of “ask someone else”. If it’s like this with just sick leave and overtime, imagine what it’s like for someone reporting sexual assault. You’ll get the same response. If you really want to have a realistic solution about solving something like harassment, you have to start with the ones who have power. Otherwise, it’s one-sided and there’s no solution. JET and dispatch companies can do so much but it’s up to the BOE who makes the final call.

There are different issues that come up when you work here. Sometimes, issues are caused by a lack of maturity, respect, or professionalism by the ALT. But often it’s systemic, pitting the ALT against a Japanese system. Japan has a more hierarchical structure that’s more vulnerable to harassment, ranked by the years you’ve worked for the company, your age, senpai/kouhai dynamics, and more. It’s a system that is open to harassment.

Does JET have a specific procedure on what to do? If it were me I’d do the following:

Basically, every university would officially have some sort of procedure in place. Whether or not people pay attention is a different matter, but they at least have a procedure set officially. It’s governmentally required. We have FD (Faculty Development). An FD session is basically a training session for faculty. The topic could be harassment, active learning, how to be educators, etc. The idea is that continuing the development of the faculty makes continuous improvement. It’s reasonable to ask if the BOEs are consistently training full-time permanent employees, and if they are given training related to harassment. ALTs should be given a copy of policies or suggestions on harassment from the BOE. The Ministry of Education has a lot of set policies for BOEs and universities, but you need to put in some effort to follow them. For example, every university course has specific objectives and curricula but you may not have read them. Harassment policies are something similar. They have to have a procedure, write it down, define it, and it’s probably sitting in the books. But it exists.