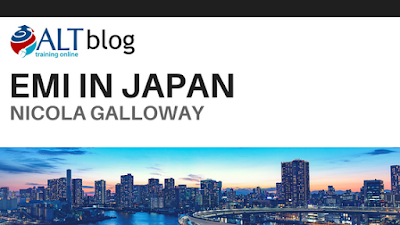 We are very lucky to have a leading authority in global Englishes education write this guest blog for us about a topic that is increasingly relevant to our everyday teaching lives. Using English only in the classroom and teaching other subjects through English has been a goal released by the Japanese Ministry of Education (MEXT) incrementally. In 2014 the ‘English only in high schools’ reform was enacted (from the policy; English Education Reform Plan corresponding to globalisation, 2014). In 2020 all junior high school English classes are taught in English only too (some cities and prefectures from 2018).

We all, very likely, teach other subjects to a greater or lesser degree in our classes every weekday; if you do a little math, practice the past tense simply by asking questions about history, or ask about capital cities and world languages with interrogative questions, you are using English to teach other subjects – and this comes under CLIL (there is an entire module dedicated to this on the free ALT training course. Teaching other subjects is called English as a Medium of Instruction (EMI) and is becoming a cornerstone of English education in Japan.

Japan’s escalator system of education: ES, JHS, HS and university (rather than a gap year or starting work at 16) means that the percentage of students that go to high school (which is not compulsory) and university is quite high. By 2013 a third of Japan’s nearly 800 universities offered undergraduate EMI courses (a rise of 50% since 2005) (Brown, 2015). There are two main considerations for us when teaching in compulsory education and high schools: washback and teacher roles. You may well have read about the influence of ‘Washback’ in the dedicated blog and discovered the influence of tests on teaching and learning in Japanese schools. A summary of washback goes; education in Japan appears to be designed for students to pass tests. If tests don’t test speaking skills, those skills are not practiced in schools – this is called negative washback. However, with the advent of EMI in universities, we are now preparing our students to learn other subjects through the medium of English – positive washback. As English teachers, we powerfully influence the effect of positive washback and our student’s future academic life.

We know then that the roles of teachers are very much changing; we are teaching a lot more than just vocabulary and grammar. Speaking to other subject teachers in your schools is a starting point to put together materials for your classes; ask the social studies teacher what they’ve taught recently, then incorporate that content in your English class, as one example. By speaking to content teachers you can reinforce learning and provide valuable, meaningful English input.

From here, Dr Nicola Galloway brings us into the much wider picture of EMI and Global Englishes – enjoy!

There has been a 1115% growth in English Medium Instruction (EMI) programs in Europe in 13 years (Wächter & Maiworm 2015), and rapid growth globally. It is both a global phenomenon and a growing field of research. In the field of higher education, institutions are increasingly turning to Englishisation as part of their internationalisation agendas. EMI courses and programmes are becoming the norm in many places where English has no official status, such as Japan. However, provision is fast out-pacing empirical research. This sparked my interest in investigating EMI in addition to my previous experience working in an EMI university in Japan, where I designed English for Academic Purposes (EAP) and English for Specific Purposes (ESP) courses for students enrolled on an EMI programme in international business. As I began researching the topic, I became concerned that despite an incredible growth in provision, there didn’t seem to be any monitoring systems, nor did universities have clear objectives or defined learning outcomes, making it difficult to assess whether such programmes were meeting their objectives. I was also interested in the impact this growth might have on the primary and secondary school sector in Japan and elsewhere.

EMI policies exist, but to my knowledge, universities have not developed clear learning outcomes. As such, it is difficult to measure their effectiveness. Research overall on the effectiveness of EMI, including the impact on students’ learning (of both content and English), staff experiences, university reputation, and different pedagogical approaches, is limited. In a recent British Council sponsored study, I explored EMI in higher education in Japan and China. It responded to Dearden’s (2014, p. 2) call for a “research-driven approach which consults key stakeholders at a national and international level” by providing insights on staff and student perceptions. In addition to providing insights into the driving forces behind, attitudes towards, and approaches to EMI, the study also raised questions as to whether approaching EMI monolingually is the best way forward, drawing on Global Englishes research showcasing how English functions as a global lingua franca.

I found that the Chinese institutions used much more of the student’s mother tongue within the classroom compared to the Japanese institutions that I visited, despite teachers reporting the contrary. It was also interesting that staff felt the use of the students’ mother tongue was a useful pedagogic tool, but were concerned when and how to use it. They also expressed concerns that students may develop a dependency on it. On the other hand, the students saw this as a sign of their teachers’ lack of English proficiency. This finding poses some interesting questions about the nature of EMI policy. Should it be a monolingual endeavour? Should we raise students’ awareness of the valuable use of their mother tongue, and also that English is now most commonly used in multilingual encounters? Should we train students to use English as a lingua franca with other international students and lecturers before entering an EMI university and, if so, how do we do this? I am currently analysing the data in more depth to investigate many of these topics.

One of the key driving forces behind monolingual ideology in EMI contexts is the belief that English-only in EMI will benefit English language development although, as mentioned they are not stated in clear objectives or learning outcomes. This is rather different to other content related language teaching models like Content and Language Integrated Language (CLIL). However, many universities do refer to the English language learning benefits of EMI, indicating that they think students will improve their English skills alongside their content knowledge. It is surprising, then, that despite the goal of improving students’ English skills, many do not offer suitable, and specifically subject-specific, language development support alongside EMI classes. There seems to be an assumption that just because a student has achieved a certain score on an English proficiency test, such as TOEIC, IELTS or TOEFL, they can function in EMI settings; they passed the test and, therefore, they must be capable of academic study in English. Some universities do offer structured language support, and I hope that the Teaching English and teaching IN English in global contexts network will provide a platform for such programmes to showcase good practice. Overall, more research is needed to measure language proficiency gain, particularly in institutions where this is the key driving force behind the policy. Rogier’s (2012) study in the UAE revealed that on average students gained a mere one half on an IELTS proficiency band over four years of EMI study, which can be achieved with 200 hours of study in a general English course (Rogier, 2012). In China, Hu, Li, & Lei (2014) found that EMI students made the same English language proficiency gains on two tests as those taking the comparative programme in Chinese at the same time as taking general English classes. Of course, there are studies which report more positive results, but there is a lack of studies to support the belief that EMI should be a monolingual endeavour to promote English language proficiency gains.

More research is also needed on how English is used in these programmes, particularly given the linguistic diversity of many cohorts of students. The switch to English in these settings does not necessarily mean a switch to ‘native’ English. Promoting an English-only policy in EMI is not reflective of how the language us used in these settings. Today, multilingualism, not monolingualism is the norm and it functions as a global lingua franca. In ‘international’ universities, many of the students are from diverse linguistic and cultural backgrounds and, therefore, students will use the language as a lingua franca. They will not only be communicating with ‘native’ English speakers, nor will they be communicating in ‘native’ English. More work is needed on EMI language policy.

There is an increasing literature reporting on the positive effects of using students’ mother tongue in the classroom (see Auerbach, 2000). Despite policies promoting the ‘English Only’ approach, Hall & Cook’s (2012) study with 2,785 English teachers in 111 countries found that own language use is an established practice, noting that the need to maximise new language in the classroom does not preclude the use of the learners’ own language, as it may provide efficient shortcuts within the learning process, be more related to the learning processes the learners are using, or be more relevant to their external learning goals (2001, 2002)(p.282). As noted, my own study revealed interesting insights into staff and students’ perceptions of language use and I’d like to see more research on how languages are used in these programmes. There is a growing body of research in the field of translanguaging (Creese and Blackledge, 2010; Garcia and Li, 2014) showing the beneficial effects of moving across languages in communication. The spread of English as a global language has resulted in the emergence of a number of related fields of research, including English as an International Language (EIL), English as a Lingua Franca (ELF) and World Englishes (WE). These have been grouped together under the one umbrella term of Global Englishes (Galloway and Rose, 2015) in its exploration of the impact of the global spread of English on English users and learners. Global Englishes research is very relevant to those researching EMI, particularly given the calls for change to ELT practice to reflect the changing needs of English language learners in today’s globalised world. However, English-only ideologies remain strong; this is evident in the global EMI movement. In pre-university contexts in places like Japan, the ‘native’ speaker ideal also remains strong. I hope that practitioners in diverse contexts who recognise the changing needs of their students will be able to encourage a shift away from the ‘native’ English model. Intelligibility, not ‘native or near-nativeness’ is important to function in today’s globalised world, and it is about time that ELT caught up with how the language is used outside of the classroom. I am hopeful that research in both of these fields (GE and EMI) will grow. EMI contexts are emerging lingua franca settings and, as such, they are attractive research settings to look at policy and practice. With more research, universities may also be in a better place to devise clear objectives, learning outcomes and academic and linguistic support for their students.